“I wanted to share with you my experience with Reiki, in the past couple of months of giving myself daily treatments and some of my family and friends.

I especially wanted to share that my 11+ year old dog, had been getting really slow in her movements, and trouble with her leg getting weak.  I gave her daily Reiki treatments and she was able to walk on her leg, and wasn’t crying out.

Although she has passed on now, I feel that the treatments gave her a sense of calm and peace, during her last weeks of life.  That to me was so important in her passing. 💗 “
– Stacy Feliciano

He often comes to me when his stomach doesn’t feel right, I put my hands on him and I can feel the gas moving, and then when he feels better, he walks away.” 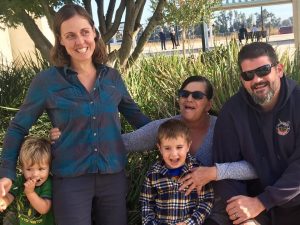 This past weekend (in December 2017) I completed my First Degree Reiki class. With it came a serge of energy, and an opening that could only be understood by those who have experienced it. It is profound.

I began practicing on my dogs first. My four-year-old son [in the center of above photo. with Catherine on the left] watched nearby. The next day he was watching again, this time closer. He saw me treating myself as well. When he asked, “mom, can you do that to me?” I was delighted. Not wanting my enthusiasm to diminish his want, I kept my cool. “Follow the energy”, I told myself.

He lay down on the floor, upon a blue Yoga mat, face up. I told him about what I was doing to him. I talked to him about the energy he might feel. As I moved through the positions and felt the energy flowing, my son wiggled, and talked. He felt as if he had been sparked with life. Yet, he lay there completely comfortable, and free-flowing, babbling on and on. He turned over and I did only two back position on his four-year-old body. When I stopped the flow of Reiki energy my boy looked at me and said, “more Reiki please”.

What I noticed about him after the treatment was fascinating. His play and expressions were so imaginative, and authentic. He was also full of confidence and compassion. He pleasured in helping his little brother, and even announced it as his role as a big brother, owning the responsibility. He now enjoys Reiki from mom at bedtime. I love that I can heal my kids on many levels. Reiki is a blessing. 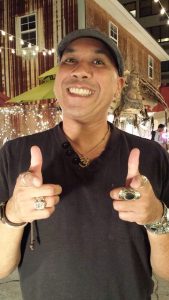 In October, while Maureen was teaching in LA , I decided to audit one of her first degree classes. I had gone so long focusing on more second degree level aspects of Reiki that I felt it was time to reconnect with the basics. Being the first degree class is highly hands on and experiential, we did an incredible amount of reiki during this time. As it felt so good to do self treatments again, Maureen proposed a challenge: Do a full self treatment every day for the next 30 consecutive days to see how it would affect my life. I felt up for the challenge and took it head on.

Generally, I’d always tried to fit my reiki in before bedtime, but would inevitably fall asleep before I could finish. Maureen had talked about trying it first thing in the morning and even though I am not a “morning person” I figured I’d give it a try. For me, it ended up working out to be the most perfect time. Instead of snoozing for 45 minutes or so every morning, that period ended up being the perfect amount of time to get in a self treatment. I initially would get up a bit groggy but by the time I was done with my Reiki, I noticed I had awakened gradually & peacefully and felt a sense of ease and well being that I rarely had to begin the day. I was getting up on time (was not late to work once during this period!), and able to ease into my morning routine without rush. It just gave me an incredible start to my day. My drive into work was peaceful, easy and carefree and it just got my days started feeling very cool, centered, quietly confident and amazing in a very subtle way.

In addition I began to notice that instead of being my usual go – go – go self, I began to settle down a bit, rest more and rest easy. I was much more chill (I’m generally pretty high energy) and began to relax more. Life and situations seemed to flow more easily and my resistance to various life situations began to decrease. All of life just seemed to slow down into this easy space where eventually I settled in to this Zen-like zone where nothing could really faze me. I noticed much slower, deeper and deliberate breathing patterns and much improved insight & clarity of thought. I became a lot more comfortable with my overall self, physically, spiritually, mentally and emotionally than I’d been in a long time. I moved into such a feel good place that it was difficult to imagine not doing Reiki every day.

The few days I missed doing reiki in the morning, I could absolutely notice the difference in how my day began. Although I would make up for it with a session later in the evening, the difference in how my days felt was profound. I’ve realized that to do Reiki first thing in the morning before I do anything else made an incredible difference for me. By practicing Reiki every morning, I felt refreshed, revitalized and reinvigorated in a way I had not been previously. It was an incredible transformation and I am grateful for the challenge. I would like to challenge all of you do to the same and see if you don’t notice at least some subtle differences in your own life. Good luck!

The little papaya tree that could (a Reiki story)…

Two years ago we planted three papaya trees. Two grew fast and tall, producing lots of fruit right away (we eventually had to cut one of them down). The third little papaya tree grew a few feet and then stopped. It didn’t completely die but it never grew any taller, never produced any fruit (we thought it may have been a male tree). Thomas kept telling me to pull it up and plant a new one. For some reason, I had grown attached to the little plant, so I just kept saying, “Let’s wait and see.”

Finally, this summer (2 years later!), Thomas decided to finally get rid of it. It made me sad to throw away my little papaya tree so I told Thomas to give it one last chance. “’ll do Reiki treatments on it- then it will start to fruit!” He decided to humor me and left it there. So, I gave the little papaya tree 5 minute Reiki treatments for three days straight and then randomly, whenever I was down by the garden.

Within TWO WEEKS of starting the Reiki treatments, the tree had started to grow new shoots. A few weeks later there were beautiful white flowers and eventually the little buds of papaya fruit. 5 months later and I’ve got a lovely papaya tree that has doubled in height and is producing a bunch of large papaya, one of which is almost ready to be eaten- I can’t wait! I KNOW it will be the MOST DELICIOUS papaya ever! Grown w/ LOVE and Reiki ♥
– (from Rasheda Joachimides, Honolulu)